I feel like I was in almost every position possible during the pushing stage. There were some that were more comfortable for me (all 4’s and squatting) and some that the midwife requested I get into for labor progression. I have to say that this stage wasn’t nearly as “painful.” The contractions seemed less painful and they also seemed further apart. The only part that was painful was when she was crowning and it seemed like she was “crowning” forever. She just wouldn’t get passed that point, no matter how much pushing I did. At one point, my midwife even had me get up and got to the bathroom in an attempt to help get things progressing. I don’t remember at what point, but her hear rate started dropping. Some positions appeared to make her heart rate slow, so it was sort of a move around and find a position where baby is okay, while I’m still pushing and feel like I have a bowling ball between my legs. My midwife said she’d only do an episiotomy if it was necessary for the safety of the baby but she was going to try everything to avoid it. There were a couple moments when I seriously thought she was close to doing it and I’d say a little prayer and then the heart rate would come back up and I’d breathe a sigh of relief. But no amount of pushing I could do was making any progress. I could feel her moving 2 steps forward, one step back with each contraction and I just kept wishing I could get the strength to just get past that point. I knew tension was building in the air the longer I pushed and she didn’t come but her heart rate continued to fluctuate.  I don’t remember at what point they had me put on an oxygen mask, but I remember feeling at that point that things truly were getting serious and she needed out!
It was during that time that I seriously began to get disheartened, feeling like there was nothing left in me to be able to do it. Everyone kept saying “just one more push” but with one more push, I felt like I was still a long way off. I could feel the overwhelming amount of prayer and knew that no amount of strength I could concoct would help her out. That any bit of strength I could come up with would be supernatural. And in some ways, I feel like I knew things were out of my hands and even though there was tension in the room, I knew that God had control and whatever happened, things would turn out.
Eventually, on all 4’s I was able to push out her head but the midwife recognized a hand in an abnormal spot and had me stop pushing and turn over onto my back immediately. My little miss had crossed her arms across her chest and got her shoulders and chest a little stuck. With a few more pushes, she was out and up on my chest, perfectly healthy. It was absolutely amazing. After the cord stopped pulsing, my husband got to cut the cord, and she got to stay on my chest for the next few hours.

It was such an amazing time! The nurses and everyone didn’t take her from me until later to weigh her and all. They feel like bonding between mom and baby is more important than doing all the stuff right away and so they essentially give you space for the first couple hours, which is part of why I chose to deliver there in the first place.  There were so many things I felt I needed to have written as a birth plan but they were standard practices that I didn’t even need one!
Honestly, it was the most amazing experience. The contractions were the worst part. Once it got to the pushing stage, it wasn’t so much painful as it was exhausting but in the end, looking back, I can’t believe I made it through without pain meds and that nothing went really wrong. It was the most amazing experience and I feel like looking back it’s kind of like a dream. The week or two before her delivery, I was seriously having doubts about whether I could do it. Some serious fears were in my head and prayer was the only thing that helped me overcome those fears and in the end have the birthing experience we desired. And looking back, I feel so great that we had a natural birth and would do it again in a heartbeat. And to have had no tears or an episiotomy just blows me away! I truly think it has to do with a state of mind. Yes, all the exercises for preparation probably help but I don’t feel like I did that much in way of preparing. We didn’t know what we were doing and we kind of just went with it.
Now we have our little angel.

How Do We Not Teach About Santa Clause?

Coach
I am an occupational therapist by trade who empowers women to create space & wellness in their homes, minds, and bodies so that they can ditch busy & chaos, embrace freedom and abundance to live the life of their dreams. 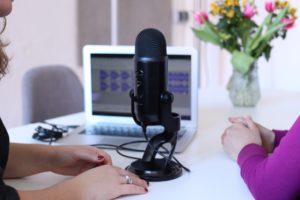